← more from
PTP
Get fresh music recommendations delivered to your inbox every Friday.
We've updated our Terms of Use. You can review the changes here. 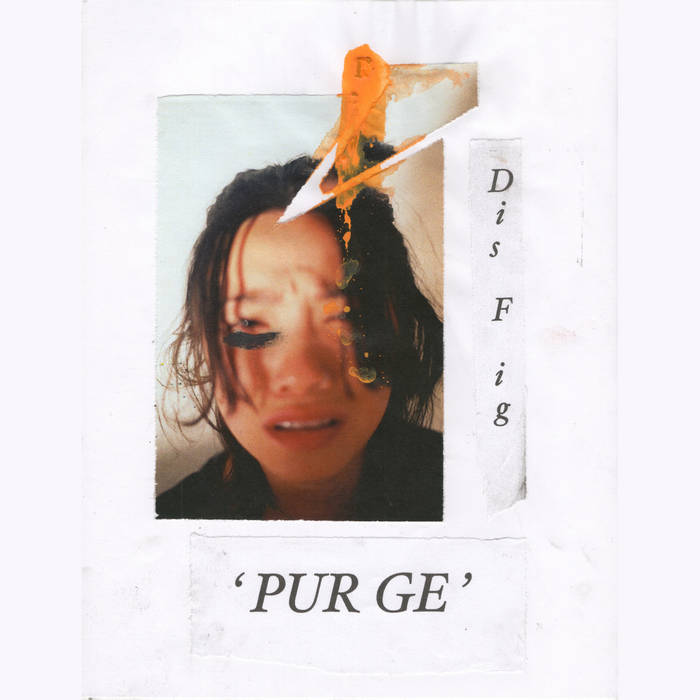 Gwynplaine de Pétroleuse A vortex of distorted vocals and screams, heavy percussion and warped destructive beats PURGE is addictive and fan-fucking-tastic. I have been waiting for this to be released in full for so long now and it does not let down in the slightest. A perfectly wicked display of pain and aggression. Favorite track: U Said U Were.

- FACT 'The 25 best albums of the last three months - January to March 2019', Apr. 6, 2019. Web.
www.factmag.com/2019/04/06/the-25-best-albums-of-the-last-three-months-january-to-march-2019/
-----------------------------------------------------------------
Felicia Chen, aka Dis Fig, arrives with her first full-length on New York label Purple Tape Pedigree – known for its genre-bending flirtations with the shadows of rap, techno, industrial, black metal and more (read our interview with label-head Geng / King Vision Ultra here). Having created a considerable buzz with DJ sets that meld a lot of those sounds to a dancefloor setting, on PURGE Chen moves away from the club and into her own head – and yours too – enacting a digital exorcism of “the feelings which you have been avoiding”. Summoning forth harsh noise that rears its head fully by the second track, ‘Alive’, this is electronic music that mostly shrugs off the shackles of tempo, rhythm and metre, opting instead to construct soundscapes that induce feelings of dread, but also release and catharsis.

Throughout the record, her tracks’ chaotic energy is engaged in a constant struggle with more tender and mournful elements. Where there are vocals, the words are largely inaudible, and operate instead on the level of feeling, sounding closer to incantations. A resolution of sorts is found on penultimate track ‘WHY’ – the purge referenced in the album’s title seemingly complete – but by the final track, ‘I Am The Tree’, the sense of dread has returned, revealing the process at work here to be cyclical, seasonal, eternal and endless. This feels like a deeply personal project, an album that has been carefully constructed with meaning and purpose, demanding to be listened to in its entirety and resisting the algorithmically dictated culture of streaming playlists."

- Astral Noize 'Reviews Round-Up: 023', Mar. 29, 2019. Web.
astralnoizeuk.com/2019/03/29/reviews-round-up-023-dissonant-sludge-transcendent-post-metal-and-poignant-death-gospel/
-----------------------------------------------------------------
"Dis Fig taps right into something industrial and noise music has always been good at providing space for: a good old Purge! This ain’t just your run-of-the-mill wall of power electronics and angry screams though, Dis Fig’s range is surprisingly undogmatic, including synthetic brass sections, flutes, and piles of quiet. She weaves them all into dramatic theatrical shorts underpinning what she’s described as the "first experiments with her own vocals on tracks". The result is an idiosyncratic mash-up of industrial tropes, sunken club beats, and cinematic sound-design histrionics.

Despite being purportedly new to this kind of singing, Dis Fig’s vocal performances are actually perhaps the outright best part of this tape. The deranged beats and rugged bass behind it all are familiar, but her unintelligible moaned and groaned lyrics on ‘Unleash’ come from a rarely-reached emotional spot. She manages to vocalise the nuanced strangeness of frustration, irritation, hatred, and sadness, which can all come at once, and when they do it can be without deserving a pure scream or a weep.

Along with rough noise, the album’s got plenty of creaking beauty - plus lashings of ear-piercing sine waves. Press your ear close to the title track, and inside its subtleties - wordless echoey voices, tentacles of keyboard notes, piercing quiet tones - is the most emotionally damaging track of the album. It represents the flipside of that outright sense or purging, a state which reveals itself during the closing thuds of final track ‘I Am The Tree’. One of the more original debuts I’ve come across in recent months, and an introverted noise play bound to reveal more to me as those spools keep on turnin’."

- The Quietus 'Spool's Out: Your Tape Reviews For March', Mar. 20, 2019. Web.
thequietus.com/articles/26210-bredbeddle-massimo-pupillo-dis-fig-spools-out-cassette
-----------------------------------------------------------------
"While 2017's "Rebirth" and 2018's "Excerpt From An Atypical Brain Damage" were also noisy compositions that toyed with pressure and suspense, the tracks possessed a hi-fi sheen, even at their most discordant points. The sound design on Purge is minimalist and desolate in comparison. This is most apparent on "Watering," where you feel as if you are hovering, like a cautious ghost, through green-gray sewers. Muted vocal asides and tonal swells guide you as much as the sound of water dripping. The music's sense of hollowness ties in with the process of confronting repressed feelings that Chen describes: "Feelings you want to be feeling or 'should' be feeling but you can't because your body won't let you. Because maybe it knows it's not safe for you."

On the truly terrifying "Unleash," Chen renders this experience primarily through her vocals, with all the uncontrollability of an exorcism—the body is merely a vessel, something beholden to what's deep inside. Amidst a single, dirge-like note and sudden stabs of bass, she begins to slowly wail through blown-out effects—"Tell me," or maybe "Help me"—and then "Get out!" with increasing urgency, until the sounds coalesce into one guttural, pained scream. On "WHY," the second-last track, Chen's voice is lucid and measured. But is it clarity resulting from ultimate release, or composure in the eye of the storm? Low rumbling just beyond the foreground suggests that while the purge is immediate, healing follows another timeline entirely.

Chen describes this back-and-forth elsewhere through more traditional instruments. On "Drum Fife Bugle," she gives us her own twisted version of a battlefield ditty, where a stoic melody with flute, trumpet, and trombone is offset by the sound of a car revving up and screeching to a halt. The rhythm is resolute, gearing us up for what lies ahead. It flows naturally into the lurching rhythm of "Alive," which repurposes trumpet and trombone as a warning siren. These instruments might normally bring warmth and comfort, but in these arrangements they become dark and austere.

The album's last track, "I Am The Tree," is a reckoning of staggering scale. The thing you've tried to fight down is finally out of you, and you are face-to-face with it. There is a gradual rumbling crescendo, with a grotesque distorted guitar sprouting up through its middle. The flute returns in bright, fragmented shards, dangling above heavy crashes of power electronics. And then, a few deep pulses and an eerie fade to silence. Ominous is an overused word when writing about frightening experimental music, but Purge expresses the feeling in its entirety: the dread of waiting for the inevitable, the horror of it coming, and, perhaps scarier still, the anxiety of what might be left after it's gone."

- Resident Advisor 'March's Best Music', Mar. 19, 2019. Web.
www.residentadvisor.net/features/3435
-----------------------------------------------------------------
"Dis Fig's 'PURGE' fits snugly into the PTP credo: The record wavers between Chen’s scorched vocals battling to be heard over brutal, electronic production and luminous, minimalist moments where her words resonate as tender pleas. Along the way, the album nods to trip-hop, techno, noise, punk and soul influences. But despite its progressive production, its emotional heart challenges the listener to empathize why Chen whips between violent outbursts and quiet pockets of respite. ...

The ebb and flow between drama and reflection define PURGE’s topography. Her words are often repressed by the production, but she isn’t crying out in vain—she’s feeling for tears in a fabric of her own creation. ... As PURGE ends ... you realize all of Chen’s self-induced emotional pain and unstinting soul-searching has been a mechanism to just, simply, feel secure."

Although Chen plays with well established horror tropes, her use of bizarre juxtapositions cultivates a more unexpected kind of terror. Opener "Drum Fife Bugle" begins with distant, rumbling bass and static-like electronics: a familiarly creepy atmosphere until the introduction of a melody played on flute. A recording of a body moving through water is used in "Watering", but perhaps more sinister is the clip used on the title track. The listener expects the prowling buzz of "Purge" to pounce, but instead it resolves strangely into a recording of a domestic scene, with a radio playing in the distance. The switch from horror to this ordinary setting conjures ideas of unexpected violence, or the threat of home invasion, more unsettling than genre thrills.

Chen's chameleon-like vocal performance is one of the album's major strengths, switching from tonal growls and hisses to assured jazz singing. Her voice is the emotional and expressive core of the album, assuming the roles of an omnipresent threat and its vulnerable victim with equal conviction. The aptly titled "Unleash" chronicles an unfurling wild state, as Chen's increasingly frantic, guttural screams multiply and intensify. On the title track, her screams are quietened to a barely legible, reverb- laden whisper. "Why" sees the voice that has been wrapped in distortion emerge clear, strong and measured. The title of PURGE is ultimately self-fulfilling: a violent, cathartic release fueled by emotional decadence."

- The Wire #422 'Soundcheck', April 2019. Print.
www.instagram.com/p/BuwCQslFrUl
-----------------------------------------------------------------
“'PURGE' is the sound of industrial runoff, of sludgy instrumentation bubbling and swirling—sometimes literally, as in the case of the sickening splashes that fill “Watering.” Melodies creep through the ooze, but by and large, the record’s nine tracks consist mostly of bleak electronics. … The lead single, “Unleash,” is a ballad of static and screaming; Chen’s voice is distorted to hell. But there are other sides to the purge too, like “WHY,” ... (t)he instrumental is still harsh and droney, but Chen sings gently, cushioned by some ghostly reverb echoing out into the darkness. Her words can be hard to make out, but she sounds centered and self-possessed, a suggestion that there is peace to be found amid the pain. …
Harrowing as they can be, 'PURGE'’s compositional twists and turns are harsh enough to offer you the same thing that they offered Dis Fig herself—relief from the bad shit you’re holding inside. Listen … and let go. It’ll help.”

'PURGE' is the debut album by Dis Fig. While the New Jersey born, Berlin-based artist is best known for her relentless and downright brutal DJ sets, this work comes in at a much different trajectory – an exploration of her own vulnerability through varying degrees of noise, vocal migrations, and orchestral composition.

“'PURGE' is about confronting the feelings which you have been avoiding. Consciously or subconsciously. Feelings you want to be feeling or “should” be feeling but you can’t because your body won’t let you. Because maybe it knows it’s not safe for you.

It’s when you reach that moment which makes your brow furrow because your chest is getting hot and something is about to erupt. When the feeling starts crawling up your neck, choking you, and you could try to make it stop but maybe it’s better for you if you don’t. When what comes out is painful - it’s tragic, it’s crippling. But with it comes a sliver of beauty. It’s burning and it’s stunning.

When it’s over, you may learn by staring at the embers.”

Bandcamp Daily  your guide to the world of Bandcamp